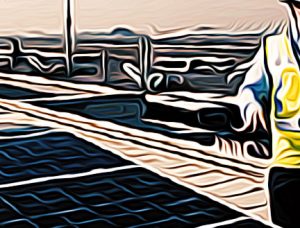 ‘Jeanine, could you answer that please?’ Frank called in the direction of the ringing phone, fanning himself with a meaty hand as he leant against the wall. He wiped a bead of sweat from his forehead as he looked out of the window, sun beating against the asphalt car park.

Groaning, Frank unstuck himself from the wall and shuffled over to his chair, plopping down in the sticky leather. Since when had summers become this hot?

‘It’s your wife again,’ Jeanine called in from outside his office door.

‘Tell her I’m busy,’ Frank grunted, leaning over to flick on his tiny desk fan.

‘I don’t know Jeanine,’ he rolled his eyes. ‘Tell her I’m dealing with a power outage or something.’

He chuckled to himself as he leant back in his chair, enjoying the cool breeze from his fan.

The breeze stopped, and Frank cracked open an eye, annoyed.

The power had gone out.

‘The power’s gone out, boss,’ she panted, rushing into his office.

‘It looks like it’s gone for the whole block,’ she said, peering out of the window. Quietly, under her breath, she murmured: ‘I knew we should have taken them up on that battery storage for small businesses idea.’

‘Nothing,’ she rolled her eyes.

Frank sighed and leaned back in his chair, getting hotter by the second. ‘You know what would be great on a day like this?’

‘Ice cream,’ Frank nodded. ‘From a little man in a cart.’

‘Right…’ the secretary frowned. She turned on her heels and slowly walked out of the room.

‘I suppose you have a better idea?’ Frank asked, waiting until she had left the office. She stalked back in.

‘Solar panels!’ she yelled, taking him aback. ‘We were offered that grant on solar panels for small Melbourne businesses, and we didn’t take it!’

‘When would we ever need solar power?’

With a stifled shriek, Jeanine stomped back out of the room.