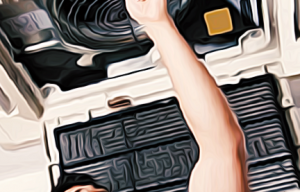 Nearly two-hundred years into the future, the earth has been ravaged by the Great Cooling. Nobody truly understands how it began, only that centuries ago when the world braced for warming, it received frost instead. Even countries like Australia experience regular snowfall and near-constant rain – not only in winter. To most people, it feels a bit like how the old history books described the ice age.

In the midst of the Cooling, children huddle around makeshift fires and rub their cold little hands together until they fall asleep. Women fashion thick coats from scraps of clothing found at discount stores. Men traipse through piles of rubble for salvageable parts and figure out how to put leftover gas to good use. Only the richest of them all are able to afford the luxury of heating services. Canberra, which was once Australia’s capital city, has now become a central refuge for these wealthy citizens. Once a political hub, the city was redesigned in the last century to be energy-efficient, with bright red heating lamps embedded in the walls surrounding the city, and a large dome encasing even the tallest buildings. Unlike people in the rest of the country, nobody in the city ever has to worry about the quality of their food, or whether their windows will cave in under the strength of the snow.

In fact, the city is so modern and efficient that it has even created its own squad of repair people – professionals who tend to the heating each day and night, to ensure the city never succumbs to the cold biting at its walls. This sort of ducted heater servicing in Canberra is unique to the city, as nowhere else in the world has mastered the ability to complete maintenance work on such a large scale. The service people are not usually citizens of the city, and in fact work long, unforgiving hours in order to earn the right to sleep inside its walls at night. Despite this, the workers make the best of it – it is often remarked how beautiful the views are from the top of the wall.