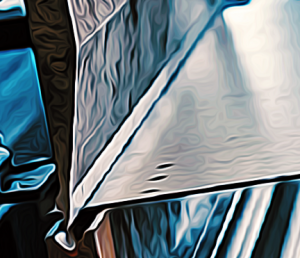 I wiped the sweat from my brow with the sweatier-still back of my forearm, unable to escape the boiling air around me. I glanced over to my forge-mate, saw that he was taking a breath too.

He flashed me a grin of metal-capped teeth and lifted his hammer in greeting. I grunted in reply.

‘Gotta love that smell of the forge, don’tcha?’ he called over.

‘What smell?’ I frowned. The only thing I could smell was the musky odour of a hundred working men, cramped in a small cave.

‘That smell,’ he sucked in a deep breath through his nose, eyes closed. ‘The smell steel makes when it’s being hammered into shape.’

I took an exploratory whiff. There was something, now that he mentioned it, a slight tang leaping from the flames, a gentle waft of—

Nope, it was still just sweat.

‘Come on!’ he rolled his eyes at my confused expression, letting his hammer clang onto the anvil. ‘You get steel products from the best steel fabricator around Melbourne, and you can’t bring yourself to smell the steel?’

‘I’ve only been working as a tradesperson for a couple of weeks,’ I frowned back. ‘And I’m trying to smell as little of this hole as possible. I don’t like when I have to pick up steel’

‘Ahhhh,’ he grinned, setting his tools down and stepping towards me. ‘That’s your problem.’

‘You’re not opening yourself up to a whole second world around you!’

‘Because the second world around me could use a shower,’ I shot back.

He roared with laughter and slapped me on the shoulder, stepping around to grab me in a bear hug from the side.

‘Try it!’ he shook me by the shoulders. Once the world stopped spinning, I took a deep breath.

‘Can you smell it?’ he whispered close to my ear. ‘Can you see it? This steel makes up our world. This steel supplies Melbourne!’

Something new, something ancient, a sweet tinge to a harsh scent, the unmistakable smell of–

‘Ugh, get off me,’ I groaned, pushing him away in disgust.