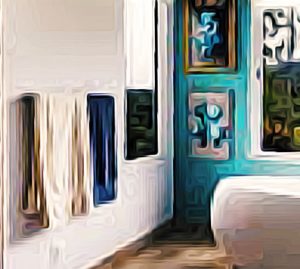 ‘She won’t mind,’ Jack murmured to himself, wringing his hands as he paced the bathroom. ‘Why would she mind? She would want me to be happy.’

He took a deep, relaxing breath. His girlfriend had gone out of town for the weekend, leaving him alone — alone with her supply of bath bombs. This was his last night before she was due back tomorrow morning, and for some reason, he couldn’t stop thinking about that bath…

Jack grabbed an orange bomb and tossed it into the tub. As the orange scent lifted into the air with the steam, he began to understand why she liked her baths so much — maybe she could talk him into making some bath modifications after all. A thought occurred to him: his girlfriend had always had a couple of candles in there with her when she was in the bath.

‘Why not,’ he shrugged, then frowned. Where did she keep her bath candles?

He hunted through the cabinets in the bathroom but couldn’t find them, then half-remembered seeing some in the laundry. He rushed out to have a look, but also came up empty.

Why had he been so reluctant to upgrade the bath? He tried to remember if they’d even gotten a quote on a bathtub remodel cost. Sydney was full of people who’d done it, surely?

The laundry was a bust, and he was about to give up on his candle quest (and check on the bath), when he remembered that she kept a scented candle on her bedside table — good enough!

He quickly rushed to the other end of the house to grab it, and the lighter next to it, then rushed back to the bathroom.

Jack’s blood ran cold. He turned around to see his girlfriend standing in the entryway, suitcase on the ground and smile on her face.

‘I got an earlier train — why are you holding a candle?’

Jack panicked, a million different excuses running through his head until he finally, reluctantly, knew what he had to do.

‘You caught me — I thought I’d surprise you with a bath!’