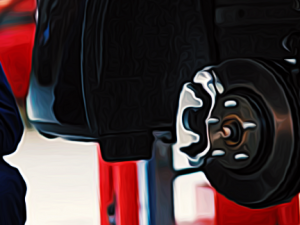 Cosmo ran as fast as his little kobold legs would take him. He passed through the Strunnel, breaking out into the darkness of night, air filling his lungs with each heaving breath. His side spiked with pain so immense he thought he would collapse, but with the woman now giving chase behind him, stopping wasn’t an option.

Hobart. He had to get to Hobart. There, in a suburb called Brighton, he would find the mechanic who could explain everything and keep him safe.

Just get to the mechanic near Hobart. That’s all you have to do. Yeah, that’s almost 400 kilometres away, but you’ve just got to find somebody kind enough to give you a lift south. But first, you have to lose this crazy lady who is chasing you like she’s a starving wolf and you’re a tasty rabbit.

How could he possibly lose her? If she’d followed them all this way and come prepared with a device to obliterate their limo, surely she would have a way to track him.

Cosmo spotted a treeline up ahead, off the road, and immediately made for it. They usually say you can run but you can’t hide. Well, what if I can’t run but I can hide? Humans aren’t good at seeing in the dark. Just get out of sight and maybe she’ll lose you. Then you can make for the workshop offering car repairs in the Hobart area.

Once he reached the trees, Cosmo wasted no time wondering if this was a good idea. He couldn’t run forever. Instead, he began to climb. Panting for breath, he made his way up the branches, wishing he could just somehow teleport to the auto shop and be done with this whole thing.

When he reached the top, he held his breath.

And waited some more.

Minutes, or perhaps hours, had passed, and there was no sign of his pursuer. Perhaps he would get away with this, after all.